When considering whether or not to shell out for a sponsorship at such-and-such trade show, companies are calculating what their ROI will be. Attracting sponsors for your trade shows can be a challenging task but the more value you can deliver to sponsors, the easier it becomes to sell sponsorship slots.

If you’re hosting a trade show, chances are you’re already planning to use audio-visual at the show. With the right AV partner, you can leverage the event’s AV to drive sponsorship. When potential sponsors see how your show can boost their profile at the event, sponsorship slots will practically sell themselves.

Here are three ways to boost the ROI for sponsors with AV:

Projection mapping is an opportunity to pump new, vibrant life into your exhibit hall and it can add value to sponsors, who want to maximize their visibility to potential patrons.

For example, is the open space of your hall interrupted with pillars? Instead of annoyances, these pillars can be sculptural screens to showcase sponsors and be a main attraction on a show floor.

The human eye is naturally attracted to light and movement, so projection mapping is a powerful tool for attracting attendees’ attention.

As either a compliment or alternative to projection mapping, LED panels are an excellent means of engaging attendees. LED displays can be put together to make large and custom-shaped screens for any space. The customizability of LED panels coupled with their high resolutions and rich brightness makes for an immersive and cinematic experience for attendees.

Sponsors will appreciate having their name and messaging (e.g. video commercials) displayed in attention-grabbing fashion, like LED screens. Even in the brightest exhibit hall, LEDs shine brightly and don’t look washed out.

Costs for LEDs have come down dramatically and they can compete with traditional projection systems. Since they are very thin, LED panels require very little floor space, freeing up space in booths for more foot traffic.

3. “Silent Disco” Brings the Party to the Expo Hall

Originating in the music festival scene as a way to keep concerts going past noise curfews, “silent discos” feature wireless, multi-channel headphones that participants wear to listen to the performer or presenter of their choice. With a silent disco-type concept for presentations, you can bring your presenters out of hiding from their breakout rooms and keep all break-out sessions together in the main hall.

Reimagining the breakout sessions elevates your sponsorship opportunities. Sponsors are attracted to ideas that are fresh and different so they stand out and are remembered. By bringing sessions together to a central space, sponsor signage and collateral can be showcased in the main area instead of being relegated to the breakout room and the silent disco concept with its sponsor support can be showcased during pre-conference marketing.

Plus, using what you already have—your expo hall—in a new creative way can be a budget saver as it eliminates the need to rent extra breakout spaces that may only be used once or twice throughout an event.

Partner with your independent audio-visual provider to collaborate about ways to integrate the latest technology to attract additional sponsors and attendees for any trade show event. 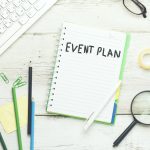 Your Pre-Event Checklist: 6 Things Your AV Partner Should KnowEvent Tips 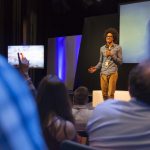